Third issue of On the Day’s Themes came out out in February 1913 and by the looks of it was primarily dedicated to sharing the views of Grigorii Aleksinskii who wrote a traditional ‘how things are at the Party’ report that ‘headlines’ the issue. Plus, he also presented his own version of what happened at the August Conference of 1912 – other versions of his ‘participation’ are already known. 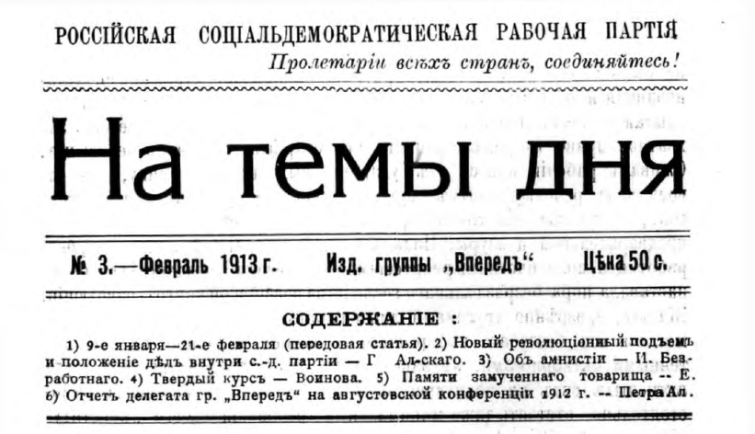 Manuilskii contributed a discussion of 1913 amnesty (on the occasion of the 300 year anniversary of the Romanov dynasty), an amnesty that brought many Russian revolutionaries home, including Bogdanov. Voinov (Lunacharskii) contributed a text on the Party’s ‘hard course’ and a small text by ‘E’ was dedicated to a ‘tortured to death’ comrade.

Vpered‘s analysis of the Lena events shows its continued adherence to ‘new revolutionary upheaval is imminent’ theory. Additionally, Aleksinskii discusses the Bolshevik crisis of 1907-09 as Lenin’s move to the right and now, with the new revolutionary upheaval, he notes that Lenin’s group is back on the Bolshevik positions and it’s possible for all left forces to work together again.

Lunacharskii’s piece is also an attempt to rethink the history of the Party in light of the new revolutionary events of 1912. He does get a few direct hits at Lenin but mostly he bashes the ‘opportunist’ Mensheviks. Interestingly, although Lunacharskii did not participate in writing the Vpered platform of 1909, he appears to have fully endorsed it in this essay from 1913; he fully embraces its predictions of an inevitable rise of revolutionary activity. 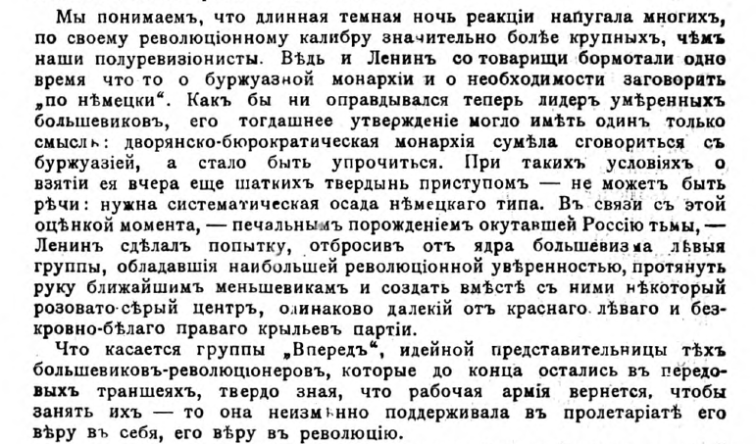 You can read the entire issue here.