And here we come to the final issue of On the Day’s Themes – no more issues appeared, most likely for the same reason as the cessation of many other publications, the start of the World War I later in the year. The last couple of lines in this issue indicate that more issues were planned. 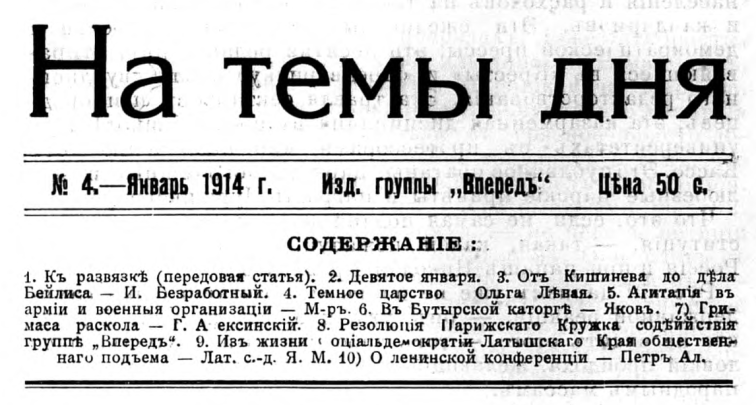 The opening editorial – On the way to denouement – revisits the common Vperedist theme, the lack of any real constitution and any real progressive change in the post-1905 period in the history of tsarism. There is no constitutional monarchy, no parliamentary freedoms, and so on. The matter is moving close and closer to denouement – the war to come, it appears, will prove Vpered right. The revolution is back!

The rest of the issue has a few interesting pieces – one by Manuilskii and two by Aleksinskii (one under his own name, one under a pseudonym). There’s no trace of any other prominent Vperedists like Lunacharskii.

Aleksinskii also wrote a text about ‘Lenin’s conference’ where the decision to split the faction was made.

The entire issue is here.